We've received many questions about what it's like to write with someone and how Team Lindsey writes The Ending Series. So, here's a little insight as to how the whole co-authoring process works with us.

First, we do a lot of brainstorming together.

Writing The Chapters!
Now, the part you've been patiently waiting for.
Initially, we create an in-depth outline of each chapter:


Progressing the story.
The general rule of thumb...

1. We take turns writing.
If Dani and Zoe are at completely different part of the country, like they were in After The Ending, we write our chapters at our own pace. In these circumstances, we don't need to build our chapters off of one another. In Into The Fire, Zoe had her own mess of crap going on in the ghost town with Jason and Jake and Tavis and Sam, as did Dani who was stuck in the Colony. We needed to make sure we were in communication with one another and somewhat following the chapter outline closely given the way our chapters integrated at times, but otherwise we were on our own. I could write 3 chapters in a day if I wanted to.
BUT
If we're using Out Of The Ashes as an example, the book starts with a Jake chapter (which I wrote since he's my character), and then moved to a Zoe chapter before getting to a Dani. That means that LF had to wait for me to write my chapters before she could start reflecting on how Zoe and Jake and the rest of the group was doing based on all that happens in the first part of the book. When there's a lot of conflict, it's very difficult to write without being up to speed on what is going on with everyone.

How do we keep track?
Aside from updating our chapter outline document with our word count, we post our chapters in a shared drive. For instance, when I finish a Zoe chapter, I post it in the shared drive so that LF can read it when she's ready to write her first chapter. This is why Before The Dawn has gone slower than usual. Because our characters (all of them) are so entwined we can't go off, writing on our own and having a merry time writing whatever we want. We have to build off of each other's chapters. If LF can't get a chapter written until the end of the week, then I have to wait that long to read it and write my own.

Which characters do we write?
And as for my Ending Series writing process... 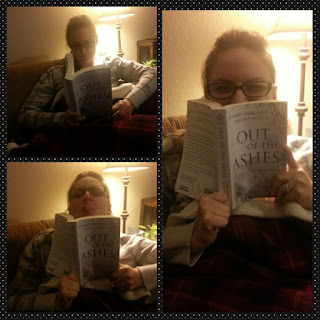 The Ending Beginnings: Clara (The Ending, #0.5)

Whatever It Takes (#1, Nothing But Trouble)

Tangled Up In You
by Rachel Gibson

A Discovery of Witches
by Deborah Harkness

The Night Circus
by Erin Morgenstern

Empress of the Seven Hills
by Kate Quinn